Free Shipping in the United States wonders, and a deep sense of community. Stitching it all together is a Caymanian pride in overcoming the challenges of today to make a better tomorrow. This is the essence of the Cayman Cigar Company. So, explore the Cayman Islands with us. Let us uncover the many treasures that inspire us to make Cayman Cigars the best in the world.

A Brief History of the Cayman Islands

Officially a British Overseas Territory, the Cayman Islands stand today as a model self-governing, parliamentary democracy. Yet the islands have come a long way since Christopher Columbus first spotted the group of three islands. It is known today as Grand Cayman, Cayman Brac, and Little Cayman, on its fourth and final voyage in 1503. He named the island group Los Tortugas for the islands’ abundant turtle population. The islands also became known for marine crocodiles or Caymanes. This is a name eventually used for the islands and later shortened to the familiar Caymans.

Marauding privateers thwarted early attempts to settle the islands. Yet, in 1670 Spain relinquished Jamaica and the Cayman Islands to the British under the Treaty of Madrid. This cleared the way for more successful settlements during the 1730s. The abundance of turtles and highly sought-after mahogany wood. Many settlers were those pushed to the edges of society, including enslaved people, marooned sailors, and the religiously persecuted. In addition, the remote, frontier environment made the islands a haven for pirates. This includes Henry Morgan, Edward “Blackbeard” Teach, and others of dubious reputations. Legends persist about pirate treasure tucked away in Cayman Brac caves.

The Cayman Islands’ self-reliant, pioneering spirit grew into the 20th Century. It is culminating in independent colony status and a vibrant, unmistakably cultural identity. Modernization followed, bringing schools, hospitals, banks, an airport, and the infrastructure necessary to accommodate the growing population and burgeoning tourist trade. Although 2004’s Hurricane Ivan was a blow to progress, the Cayman Islands reemerged better than ever, today offering the highest standard of living in the Caribbean. It is a success story built on the resiliency and sense of community that flows throughout the Caymans.

The Cayman Islands are an adventurer’s playground featuring world-class scuba diving, boating, hiking, fishing, and other sporting pastimes. Favorite excursions include exploring the caves of Cayman Brac or Little Cayman’s coral reefs. It is widely considered the best in the Caribbean. For less vigorous adventures, Caymanian art, food, music, history, and storytelling are central to everyday island life and offer a relaxing yet engaging flavor to the island experience. Popular options include checking out the many historical sites and specialty shops of Grand Cayman’s Bodden Town or perusing the National Museum in George Town.

The Islands are also home to various festivals celebrating Cayman’s vibrant arts scene. For example, every February and March, the Cayman National Cultural Foundation hosts Cayfest, a national celebration of Caymanian art and culture. The unforgettable Red Sky at Night event highlights the festival with a nighttime cultural fair featuring food, music, and dancing. No matter the island experience, you can also rest assured a refreshing beverage and delicious Cayman cigar is always within reach.

Above all, the warm Caymanian smiles that greet you at every turn, the Caymanian people, make the Cayman Islands a top destination. The most famous example of the Caymanian spirit is the legendary “Wreck of the Ten Sails.” Early one February morning in 1794, a British convoy of ten merchant ships wrecked on the coral reef off Grand Cayman’s East End. Caymanian residents went into action, braving the deadly reef and pounding waves to rescue all of the ships’ crew and passengers. When the ordeal was over, 450 lives had been saved. This selfless Caymanian character is infused into every Cayman Cigar Company creation.

Taking a cue from the Caymanian people’s giving and inclusive nature. This is our co-founders, Granger Haugh and John Lemuel Hurlston, launched Cayman Cigar Company in 2018 to create world-class cigars and give back to the community. We donate 100% of net profits to charitable organizations, including the National Warplane Museum, Knights Templar: The Raymond Davis Templar Foundation, Knights Antiquity Historical Society (KAHS), Breast Cancer Foundation of Grand Cayman, Smoking Shields, and others. We are proud to donate profits to these charities while offering aficionados luxurious Cayman-inspired cigars that rival the best Cuban brands.

Our Cuban-trained master cigar rollers use only the world’s finest long-filler Caribbean tobaccos. Each handcrafted cigar offers a smooth, complex experience that keeps the taste buds blissfully dancing. Explore our Cayman Cigar collections today. It includes the Diplomat, Monarch, and Caravel collections and three expressions of the exquisite Sovereign series, to discover the Cayman cigar right for you.

Discover the Cayman Islands One Cigar At A Time

We are committed to giving a helping hand to those most in need. This is from our co-founders to our team members and charitable partners. This is the Cayman way. You are building on this legacy with every cigar you smoke. So, explore Cayman Islands and learn more about the Caymanian spirit at Cayman Cigars online.

You have already applied a coupon to the cart items.

$5 donations made to one of our non-profit partnership charities with each cigar purchase.

Please select a charity below

$5 donation to one of our non-profit partnership charities made with each cigar purchase.

Please use this code after adding cigars to your cart for this non-profit to receive a contribution with your order. 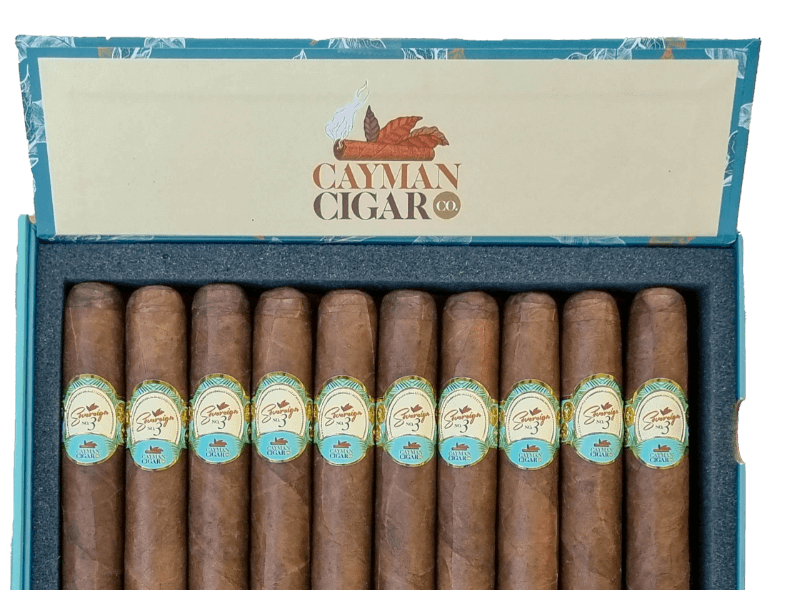